Home
Blog
DJI Puts $145,000 Bounty On The Drone Pilots Who Were Disrupting Flights

On April 14, 17, 18, 21, delinquent drone pilots have been flying drones near Chengdu Shuangliu International Airport in China, causing more than 100 flights to make unscheduled landings or returns, which affected more than 10,000 passengers.

DJI, The world’s leading drone manufacturer, is trying to help out the investigations by offering up to 1 million yuan ($125,000) in rewards for clues leading to further help of the police investigations. 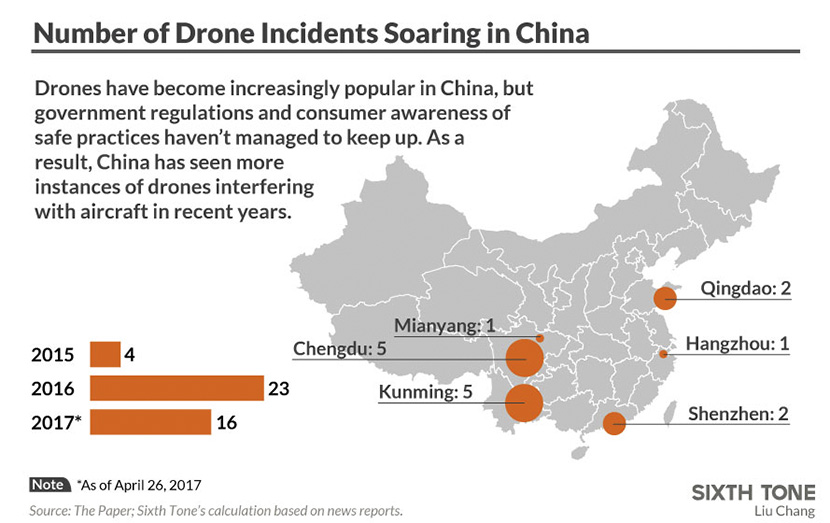 “We hope to help the police solve these cases as soon as possible, to clear up the unnecessary misunderstanding about the [drone] industry,“

Let’s not forget that DJI has software which limits the abilities of the drones based on the pilot’s location. For example, DJI has established that airports are no-fly zones. However, there are some ways that drone pilots can bypass this measure and fly without restriction from DJI.

According to Sixth Tone, “There have been more than 15 incidents of drones flying near airports or aircraft since the start of 2017, causing delays and diversions of flights. Last year, there were 23 such incidents recorded throughout China, up from four in 2015, according to a report earlier this week by Sixth Tone’s sister publication, The Paper.“

I don’t want to speak for all drone lovers, but I find this whole incident of drone pilots disrupting airports unbelievably annoying. When drone pilots do things like this it puts a bad light on our industry. Lots of jurisdictions all over the world are in the midst of deciding how they plan on regulating drone uses and though it is honorably meant to protect the public if more pilots fly recklessly… We may not be able to fly our drones anywhere.

Jurisdictions all over the world are in midst of deciding how they plan on regulating drone uses and though it’s meant to protect the public if more pilots fly recklessly then we may not be able to fly our drones anywhere.

This is exactly why we at ImproDrone try so hard to promote safe drone uses with our Free Drone Course. A smart home uses Internet-enabled devices to manage and check …

The drone, sometimes called an unmanned aerial vehicle (UAV), was originally used as a reconnais

Sports lovers, if you need even more sports in your day-to-day life on top of what’s already provide

The Best Drones Under $50

The drone, which was originally invented for military purposes, is now more commonly seen as a v

What is A Military Drone?

How to Fly a Drone: An Ultimate Guide for Beginners In 2019

We asked our friends at Assignment Geek for some help on drones, specifically on how to fly them as

There are many different types of drones available, but they can be divided into three main categori

Whether you got a hobby drone or a professional drone, you should know the regulations to use them l

Are Hobby Drones Appropriate for Kids?

Want to give your little one a hobby drone as a gift but confused if it is appropriate for him/her?

Drones or UAVs (Unmanned Aerial Vehicles) have been around since quite some time (the early 80s). Ho

The Best Drones for Backpacking and Hiking

IntroductionDrones aka quadcopters or UAVs provide a bird's-eye view of the surroundings, which can

Specialty Drones: Guide to Fishing Drones and Our Best Picks

What are Fishing Drones? Fishing drones are the helping hands of fishing enthusiasts and help them

While there are numerous types of drones, commercial drones are the standard used in the constructio

How To Make Your Home Smarter?

A smart home uses Internet-enabled devices to manage and check electronic devices in your apartment.