One thing that I’ve noticed that’s very common in the drone community is that new drone pilots that are interested in drones tend to have a hard time jumping into the community.

One of the problems that they have is that there is a learning curve when it comes to flying drones, but a big problem is that they just have a hard time finding a drone that matches their ability, while not being too expensive.

When I first got started with drones I had the same problem, but then again I didn’t have a great resource as you have with ImproDrone. So, to be like a big brother to you, I have created a guide which covers all of the best drones for anybody.

This is a massive guide that goes over 24 drones in different categories. It’s called “The Ultimate Guide To Picking Your Perfect Drone”.

I also created a tool which helps you to find the perfect drone that will meet all your needs called, The Drone Picker Tool.

But in this post, I am going to review one of the most popular drones for beginners, The UDI U818A. This is a quadcopter that tops the chart on Amazon and is almost unanimously praised with 4-5 Star ratings on Amazon.

So let’s get into the review 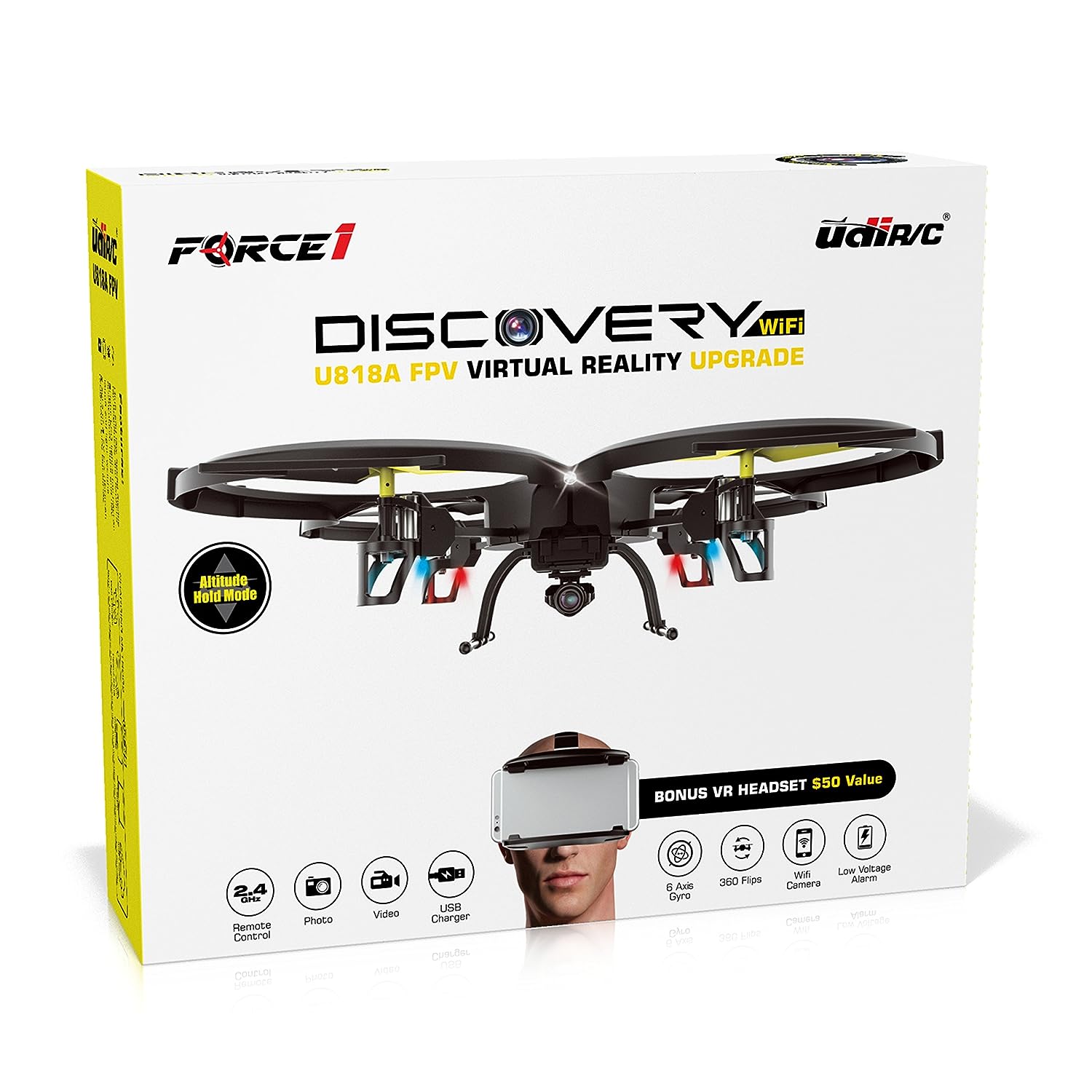 The UDI U818A is a rather minimalistic quadcopter that comes with a camera and with a prop guard that is attached to the body of the drone.

Nevertheless, the manufacturers of the drone knew that that could be a problem so they made sure that all the wires are securely attached to the drone.

Another cool thing about the design of this drone is the fact that the body also protects the propellers. Which will definitely come in handy as a beginner when you start hitting trees and walls on accident. 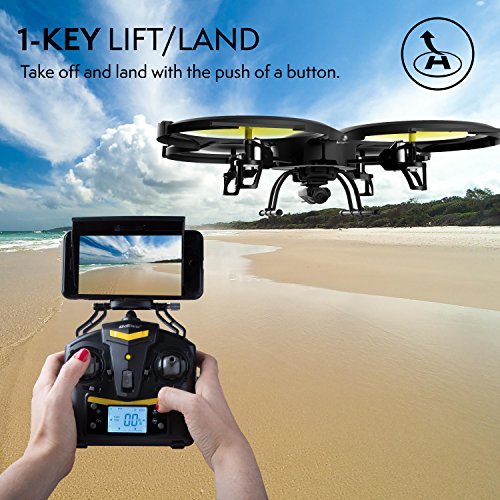 One of the great features of this drone is the fact that it comes with an attached camera. I personally always try to buy a drone that comes with a camera and with the UDI U818A you get that feature at only $48.

Now, at that cheap of a price, you can’t really expect anything spectacular. The camera is at the bottom of the drone and is very small. If you detach it from the drone it weighs only 0.2 ounces. It also includes a 2GB microSD card and has a tiny lens so you can understand why I said not to expect anything spectacular. The videos are shot at 640×480 pixels at 30 frames per second, this is worse than the average cell phone camera today, but it gets the job done. 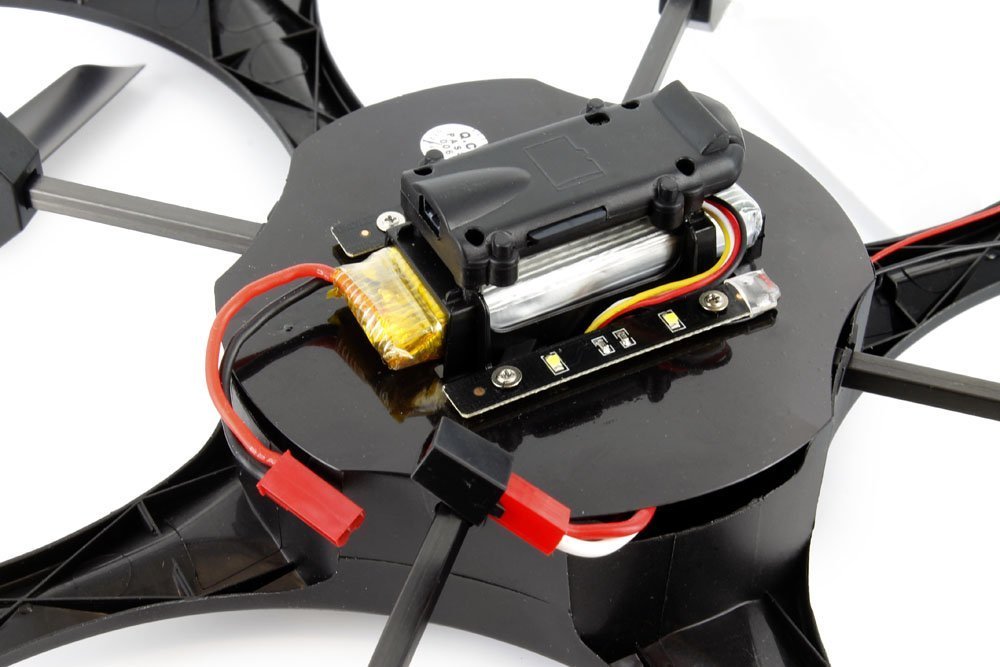 The drone is capable of shooting still images at 1280×960 pixel resolution, which is decent because the images are ok in bright light and the camera can bring about some decent colors. This drone also does not have stabilization technology, so make sure that you are smoothly flying your drone, because if not your videos and photos will pick up the shaking and cause it to blur.

The UDI U818A is a great drone for beginners who want to start learning how to fly drones, but remember since this drone does not have any stabilization technology so if you are used to flying top-notch drones such as the DJI Phantom 3 or 4, then you might have a hard time.

Another thing to remember is the fact that this drone is only 4 ounces.

So at such a lightweight, try not to fly the drone on a crazy windy day because the wind could easily disrupt your drone and could damage your drone.

What’s it good for?

The UDI u818a is a really great drone if you are a beginner who just wants something very cheap. This drone comes with many of the basic features that you would expect from a drone, however, it’s not the greatest quality.

Like we talked about before, this drone does not come with noob-friendly stabilization technology like the DJI Phantom drones have which makes it seem very easy to fly and It also doesn’t have the greatest camera for making youtube videos or taking great photos.

But if you are a beginner then those features aren’t really important when it comes to learning the basics of a drone.

As I am writing this review, The UDI U818A is only $45, which is an amazing price for beginner drone if you compare that with the DJI Phantom 3 which costs $415.

Hopefully, at this price point, you won’t be too devastated if your drone gets destroyed or lost. This will help you to try out some cool maneuvers and maybe even fly it in the house if you want.

The UDI U818A comes with a small but impressive set of features that I think you will like. One of the cool features of this drone is it’s 360° eversion maneuver. When you get high enough with this drone, you can click a button and it will perform a very cool 360 flip without you having to control it.